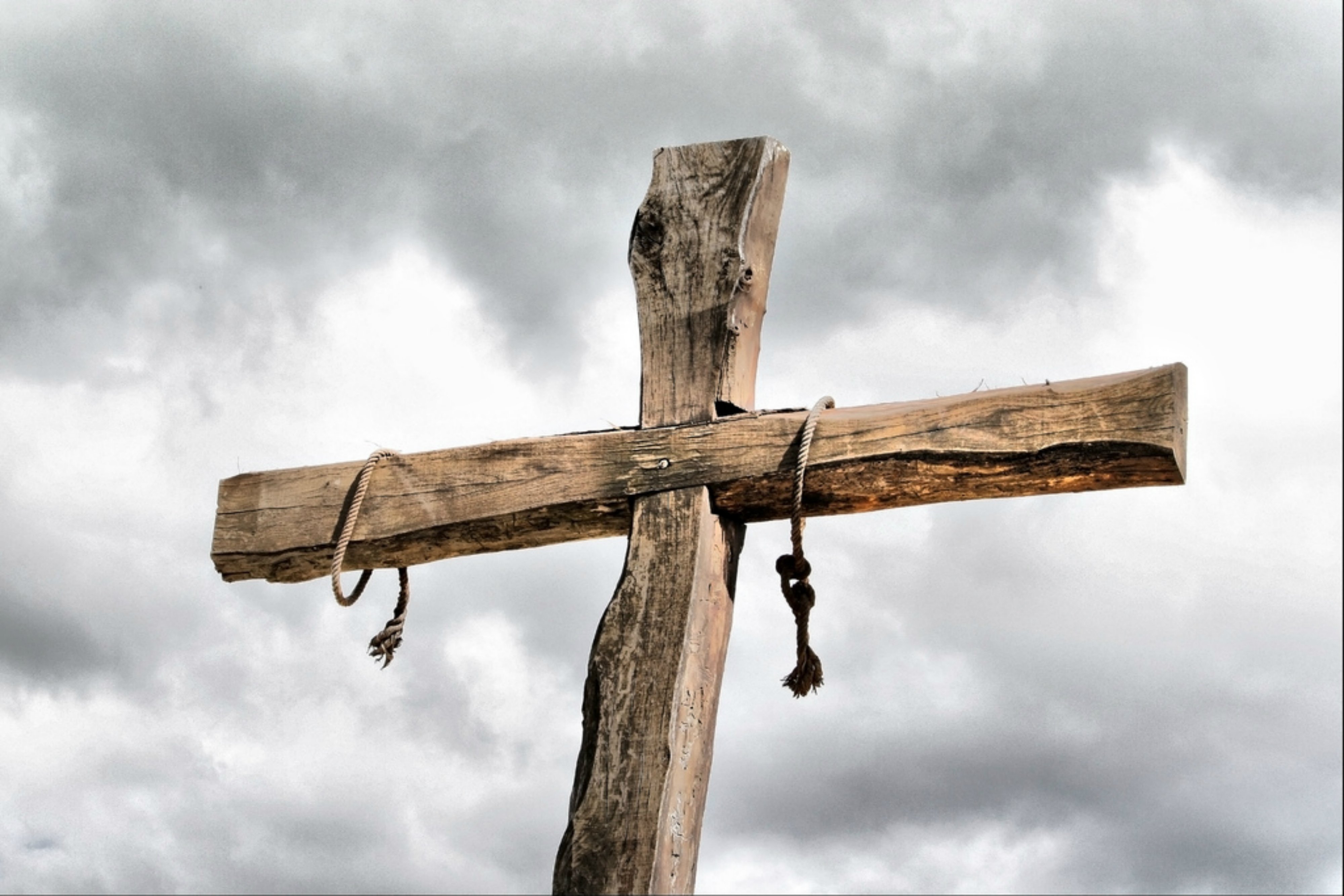 Today is a special day.  We call it, “Good Friday.”  Many people put this label on this day without even knowing what the day means.  Today is the day when Jesus Christ was mocked and shamed, wrongfully accused, beaten until He was unrecognizable, and nailed to a tree until He breathed His last.  It is the day that Jesus died, at least in the way that we understand death.

How and why do we call a day, “Good,” when it involves the brutal torture and crucifixion of an innocent man?  Friend, there are numerous reasons to call this day, “Good.”  You could spend a lifetime making a list of reasons why the cross is an event to celebrate.  I want to examine five massive reasons why Good Friday is indeed, “Good.”  Afterward, maybe we should spend our lifetimes digging into the endless reasons for joy in the cross.

“When you were dead in your sins and  in the uncircumcision of your flesh, God made you alive with Christ.”  (Colossians 2:13)

Anyone who has put their faith is Jesus Christ is now alive with Him.  Outside of the cross, we were always dead.  Sure, we had breath, but we were ultimately dead.  What caused this death?  Sin caused this death.  Paul says that we were dead in our sins.  Sin kept us from being able to be in the presence of God.  God required a perfection that we could not attain.  We were helpless with no way out.  This is the definition of being spiritually dead.

There is Good News!  God has made us alive with Christ!  We will unpack that a little more in the following sections, but this is a great place to start.  First, notice that it is God who made you alive.  You did not make yourself alive.  It had nothing to do with you.  This, in itself, is a miracle that we should be celebrating on this day.  You are now alive in Christ.  The old, dead, and helpless flesh is now gone.  New life is here.  This is indeed, “Good!”

2.) God forgave ALL our sins at the cross.

“He forgave us all ours sins, having canceled the charge of our legal indebtedness, which stood against us and condemned us; he has taken it away, nailing it to the cross.”  (Colossians 2:13-14)

If you read the verses above this sentence and do not feel anything, you do not fully understand what they are saying.  All sins, the small and the big, the hidden and the willful, the ones forgotten and the ones that keep us up at night, all of them are forgiven in the cross.  This should be liberating for many who are held down by their guilt and shame.  The cross was not a temporary cover-up for sin.  The cross did not cover only small sins.  Rather, the cross was a complete removal of all sin from the conscience of the believer.

Our sin left a charge against us.  That charge demanded us to death and hell.  That is what we deserved.  No defense attorney could talk our way out of what we were guilty for.  The charge: sinning against a holy God.  God, in His grace at the cross, took that charge of our legal indebtedness, which condemned us to hell, and nailed it to the cross.  “It has been taken away,” Paul says.  Before the judge could sentence us, God intervened and took away our guilty verdict.  Those charges were nailed through the hands of His Son, never to be held over us again.  This is indeed, “Good!”

“And having disarmed the powers and authorities, he made a public spectacle of them, triumphing over them by the cross.”  (Colossians 2:15)

I love this truth so much.  God has completely disarmed the power of our enemy in the power of the cross.  Satan has no power in the life of the believer.  Sure, he can try to mess things up, but his head has been ultimately crushed in the shadow of the cross.  He has been completely disarmed.  What God purchased at the cross cannot be stolen by the enemy.  No longer can he hold your sin against you.  No longer will his lies discourage you.

I love the description of God making a public spectacle of Satan and his armies.  Other translations say that He put them to open shame.  God did not hide this victory.  No, He let the world know who reigns!  There was a public triumph over the powers of darkness.  The cross won the war and it wasn’t even close.  Tell Satan about the cross today.  Remind him of his open shame.  He has to flee in terror!  This is indeed, “Good!”

4.) God brought us to Himself at the cross.

“For Christ also suffered once for sins, the righteous for the unrighteous, to bring you to God.”  (1 Peter 3:18)

Christ died to bring you to God.  This is the answer to our impossible dilemma.  We talked in the first section about being dead.  God bringing us to Himself, through Christ, is exactly how He made us alive.  We could not get to God because of our sin.  No action could make us holy enough, and no earthly sacrifice could cover us enough.  We were eternally separated from God outside of the cross.  But God, in His mercy, sent Jesus to take our place and pay the price to bring us to Him.

The righteous has taken the place of the unrighteous.  We do not deserve the redemption we have in the cross, but God gave it freely.  Christ has suffered for us.  This only needed to happen one time because of His perfection.  He suffered once for sins, the righteous for the unrighteous, to bring us to God.  The chasm that once separated us from God, because of sin, has now been destroyed and taken away.  Christ died to bring us to God.  We can now stand in His presence through the cross.  This is indeed, “Good!”

5.) God fulfilled all prophecy in Christ at the cross.

“Later, knowing that everything had now been finished, and so that Scripture would be fulfilled, Jesus said, ‘I am thirsty.’  A jar of wine vinegar was there, so they soaked a sponge in it, put the sponge on a stalk of the hyssop plant, and lifted it to Jesus’ lips.  When he had received the drink, Jesus said, ‘ It is finished.’  With that, he bowed his head and gave up his spirit.”  (John 19:28-30)

These are the last seconds of Jesus’ life on earth.  His last words were, “It is finished.”  A massive collection of Old Testament promises and prophesies about the Messiah were fulfilled in Jesus dying on the cross.  Why is this important?  This happened so that you can know and believe that He truly is the Son of God.  Someone coming to fulfill even a handful of Old Testament prophecies would be nearly impossible.  Jesus fulfilled every single one of them.  The probability of this happening is challenging for a human mind to even comprehend.

I highlight this point to give us a great assurance for just how good this day is.  No one could have done what Jesus did.  Prophecy being fulfilled in Christ proves to us that He is the Son of God.  He is the Messiah that was spoken of years ago.  He is worthy of our affections.  He is the only way to God.  He is the only One who can save our souls.  You can trust Him.  His cross proves it all.  He is indeed, “Good!”

We have only scratched the surface of why Good Friday is “Good.”  I pray that this short list would ignite your affections for Jesus Christ.  I pray that this short list would also spur you on to dig into the Scriptures to see all that the cross proves for you.  Never lose your joy in the cross.  A bloody cross can indeed be “Good.”  In fact, it is much more than that.  Good Friday is glorious, beautiful, full of grace, undeserved, and so much more.  Do not shy away from the title we give it, as long as you understand what makes it “Good.”

God’s redemptive plan was accomplished on the cross.  Christ died in our place.  However, like I hinted at early on, his death was not like the death we understand.  No, He was not in the grave long!  This is another amazing reality that we will celebrate on Easter Sunday.  There is an empty tomb, and this is the icing on the glorious cake of God redeeming His people.  What a Savior we have!  What a day this is!  It is indeed, “Good!”